Blog/Capital Markets /The stock split season is on – what does this mean for you? 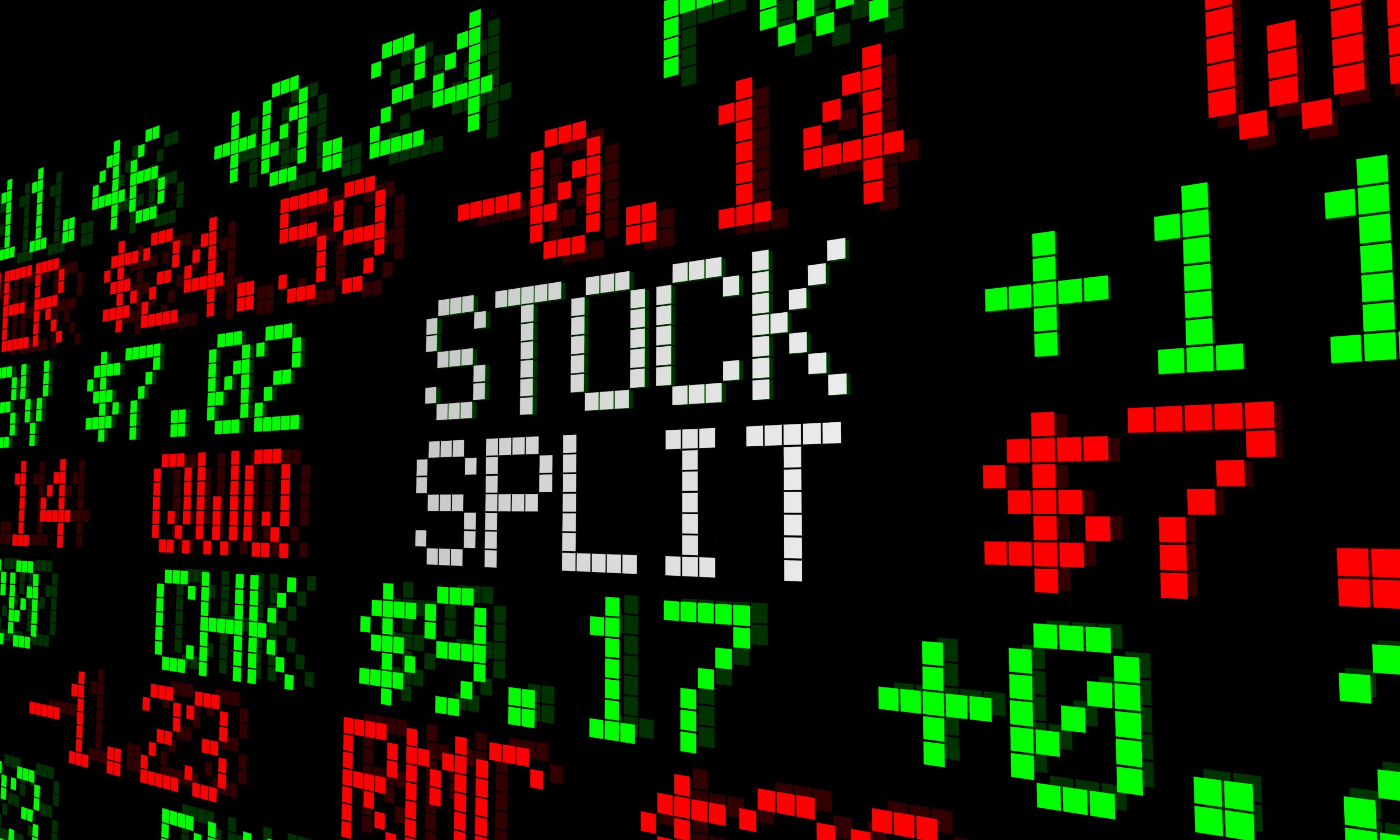 On September 1, Apple (AAPL) and Tesla (TSLA) split their stocks. People who owned 1 share now find themselves holding 4 in Apple’s case, and 5 in Tesla’s. On Tuesday, the day of the split, Apple’s stock gained as much as 3.4%, and Tesla rose 12.5%. Since the announcement of their stock splits, Apple and Tesla shares jumped 40% and 70%, respectively.

Numbers can be tiring. Normally, I wouldn’t throw as many figures in your face, but they speak the truth. Everyone has been talking about Apple and Tesla for weeks already. Now investors and analysts see Apple and Tesla stocks as the hottest things on earth.

I’ve dealt with capital markets for more than ten years. I believe that I can recognize an opportunity when I see it. Stay with me to find out how these stock splits work and why you might want to consider these opportunities, as long as they suit your trading style and goals.

First, let me tell you a bit more about stock splits.

Why do companies split their stocks?

Companies split their stocks because such a move can make shares look more affordable to small investors. Both Tesla and Apple wanted the same thing: to attract more people into investing. If more people start putting money in, the stocks’ liquidity increases and prices tend to surge.

This means it’s your chance to jump aboard and invest in the long term. But the short-term gains don’t look too bad either.

Graph from YCharts.com showing Apple and Tesla stock increase from August 28 (the day before the splits) and September 1 (the first day of the split). Both stocks added more than 7%.

Keep in mind that I just analyzed the stock performance one day after the split took place, and you can see the value gains were already noticeable.

Hopefully, I have got your interest by now. I will give you even more arguments about why I think Tesla and Apple might be viable investment options in the next few lines.

Apple, at the fifth stock split

Apple is the only publicly-traded company boasting a market capitalization of over $2 trillion. September 1 marked the corporation’s fifth stock split since it went public in December 1980.

Generally, the stock increased in the medium to long term after a stock split.

In one case, Apple lost 61% of its value after the 2000 stock split. But that was an exception since the DOT-COM crash affected many tech companies back then.

Following the stock split, the Dow Jones had to make some adjustments to the stocks it includes:

One more thing I forgot to mention: not only has Apple stock increased following stock splits but so have dividends paid to its retail investors.

Apple stock surged more than 80% as of September 2, 2020 – chart courtesy of YCharts.com

On the other hand, Tesla split its stock for the first time when shares grew 465% this year alone, smashing 33 records on their way. In August alone, shares jumped 56%. A month prior, the company reported a fourth-consecutive profitable quarter for the first time in its history.

Chart with Tesla stock performance so far in 2020 courtesy of Nasdaq.com

In the end, allow me to write a few words on the man himself, Elon Musk. On September 2, he became the third richest person on earth, surpassing Mark Zuckerberg. He’s now behind Bill Gates and Jeff Bezos. Apart from Tesla, Musk also founded several other companies, including SpaceX, The Boring Company, Hyperloop, and OpenAI. His notoriety and unique approaches have boosted Tesla as a one-of-a-kind company for investors worldwide. And that feat alone accounts for several percentages from that massive stock surge in the past years.

Since it first went public, Microsoft has had 9 successful stock splits with the last one occurring in 2003. For every share that an investor-owned before the first split, he would now sit on 288 shares.

The immediate short-term impact of the split on Microsoft share price is worth noting. On only 1 occasion – in September 1987 – did Microsoft’s stock closed at a lower price on the day of the split than the day before. At that time, Microsoft shares closed at $114.50. Typically, the stock should have traded at $57.25 after the 2-for-1 split. However, the actual closing price hit just $53.50 per share, translating to a 6.55% drop.

Meanwhile, the remaining 8 splits showed gains, the largest one posting a 7% increase in 1996. The numbers before the split showed a $76.39 share value, yet the stock closed the next day at $81.75. Microsoft’s results show that even though stock splits have no theoretical impact on a company’s value, shareholders give a lot of importance to these events.

The last split so far for Microsoft stock marked the first time when the company declared it would start issuing regular dividends. Combining the stock split and dividends made Microsoft shares look more attractive to a broader range of investors, and prices gradually grew in the long term.

Netflix only split its stock twice. The first time in February 2004 and the second one took place in July 2015. Both splits reflected the organic growth of Netflix’s business model from its early stages to the mid-2010s.

The first stock split took place almost two years after Netflix joined the stock market. The company had just hit $1 billion in market capitalization and showed hints of its broad appeal and improved finances. Revenue had surged 80% in 2003, as the company reached 1.5 million subscribers.

Between October 2002 and January 2004, Netflix saw its shares climb by more than 1,500%, approaching $80 apiece. Netflix seized the opportunity and performed a 2-for-1 split – chart courtesy of YCharts.com.

The split from July 2015 saw Netflix in an entirely different position. The 7-for-1 split made the company’s stock even more appealing for small investors, with shares skyrocketing in the first 6 months, before stabilizing afterward.

Chart with Netflix stock performance compared to S&P 500 from July 2015 to July 2016, courtesy of YCharts and The Motley Fool.

In 2015, the company had introduced its streaming video service and boasted 65 million members worldwide in the second quarter of the year: 42 million domestic subscribers and 23 million international customers. Netflix added 3.28 million subscribers in the second quarter alone, double the subscriber count from 2004. That amount of success helped push shares to nearly $700, making Netflix one of the most expensive stocks in the S&P 500 index.

In the graph below, you can note the gradual growth between the two stock splits.

Amazon performed 3 stock splits in the late ’90s: in June 1998, January 1999, and in September 1999. Back then, Amazon was at its early stages in the development process.

Amazon closed its first day on the stock market in 1997, at an adjusted $23.50 per share. One year later, share prices almost tripled in value, and Amazon performed its first 2-for-1 split. The next move followed in January of 1999 after another impressive gain of 755% in seven months. This time, Amazon opted for a 3-for-1 split.

Finally, the last 2-for-1 increase occurred in September 1999. This time, the stock dropped 4% lower.

Chart with Amazon stock performance between stock splits courtesy of YCharts and The Motley Fool.

Nowadays, investors expect Amazon to stage another split if it wants to keep up with Apple’s growth. The markets also predict that Amazon could get an invitation to the Dow Jones Index, but the primary condition is to split its stock. Anyway, I’ll be keeping a close eye on Amazon, since it could prove the next big thing to invest in.

Next stock splits – check out these companies!

Google and Facebook are the two other FAANG group members expected to split their stocks in the coming months. Both posted important gains in 2020 and could spark renewed interest in their stocks amid traders should they decide to split.

Also, NVIDIA more than doubled its share value year-to-date and might be looking at a stock split soon.

They say growth brings even more growth, and many investors believe the sky is the limit for both Apple and Tesla.

I would also look at what the future might have in store, and Google, Facebook, and Nvidia could be the next exciting opportunities.